The rapid development of data storage offerings and data distribution technologies along with the ever-going emergence of new hyper-converged solutions, undoubtedly, make a positive impact on the market, introducing the competition between major vendors and new players. As a result, customers are provided with a wide range of solutions from various price categories.

Every year, it becomes easier for IT staff to choose a hyper-converged solution that will meet the necessary requirements for functionality, usability, and reliability. According to our research, today, the most popular “mass-market” choices for software-defined shared storage are Microsoft Storage Spaces Direct, VMware vSAN, and Ceph.

VMware has initially integrated vSAN to their ecosystem which allows system administrators to get the complete control over the storage and hypervisor stack from the single pane of glass. On the other hand, despite the success of Microsoft Storage Spaces Direct and Ceph, there are still opportunities for further enhancements. That is why StarWind Manager is designed exactly to improve the experience of deploying, configuring and managing the solutions mentioned above.

While the backend technology beyond S2D is flexible and feature-rich, the management counterpart incorporates some limitations. The graphical user interface of Windows File and Storage Services role just partially covers the S2D configuration and maintenance process, leaving some advanced configuration options and extended management capabilities on the commandline shell (PowerShell). Also, System Center 2016 Management Pack for S2D addressed some of the above concerns, it still requires Microsoft System Center 2016 to be purchased, deployed and configured which leads to additional budget and efforts spent by the company’s IT staff.

Ceph is a distributed object storage solution which can scale horizontally up to exabyte level and is based on the Reliable Autonomic Distributed Object Store (RADOS) technology. All data in Ceph is stored as objects. Ceph also incorporates a set of software libraries that provide support for other storage protocols.

Ceph was initially developed as a self-managed system which requires minimal intervention when the cluster is deployed and configured. However, this is the process of deploying and setting up all Ceph components, that takes the most time and efforts from the IT staff. Despite there are several open-source solutions providing GUI to deploy and manage the Ceph storage cluster (Calamari, InkScope, Ceph-dash, etc.), the development process of these projects is not strictly regulated due to obvious reasons.

However, it is not simply a monitoring tool. StarWind Manager is designed to be adaptive and flexible. In addition to the included set of features, every user can adjust the interface, reconfigure existing plug-ins or even create completely new and unique extensions. Interface views consists of widgets that can be rearranged and reconfigured for different data sources. 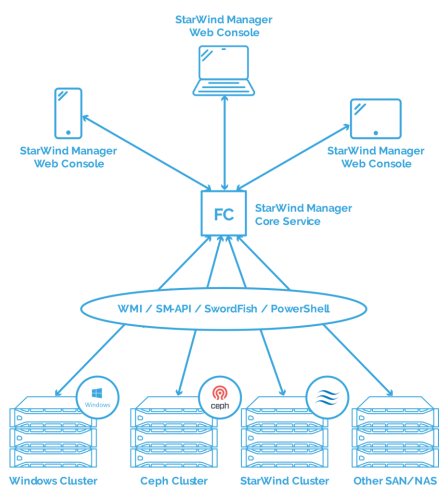 StarWind Manager allows customers to get the full control of their StarWind Virtual SAN, Microsoft Storage Spaces Direct or Ceph Cluster infrastructure from the single web-based user interface. Moreover, customers even may use StarWind Manager to monitor and control their IoT devices. Apart from organizing separate servers into highly-available clusters, the software provides a convenient way of infrastructure monitoring through the combination of configurable dashboards and plug-ins for StarWind Manager Core and Agents. The flexible architecture of the software allows every customer to adjust, reconfigure or create new plug-ins and extensions to ensure conformity with any specific aspect of local IT infrastructure.