Download pdf
This document refers to the previous StarWind Virtual SAN version. To view the document for the current version, please follow this link

With growth of popularity of private cloud infrastructures, automation of storage and hypervisor management becomes ever more acute.

The solution offered by Microsoft for Hyper-V virtual machines management was initially System Center Virtual Machine Manager (SC VMM). However, until recently there was no usable tool for automatic storage management. This functionality appeared in the recently released SC VMM 2012 R2 as well as support of SMI-S standard.

Now the VMM console enables users to create, remove, format, assign and connect disks to the Hyper-V hosts. Originally, these tasks were done via utilities provided by the storage array manufacturers which complicated management.

This article describes how to configure, connect and use SMI-S provider to automate management of storage arrays. We will use StarWind iSCSI SAN V8 beta as an example of iSCSI storage that can be operated with SMI-S. Click here to download the storage software.

Storage Management Initiative – Specification (SMI-S) is a standard of the  disk storage management. SMI-S is based on the Common Information Model (CIM) open standard and on the Web-Based Enterprise Management (WBEM) technology. SMI-S is certified as an ISO standard and is supported by many storage system vendors.

SMI-S is fully supported in Windows Server 2012 by the Storage Spaces functionality. Storage Spaces enables the use of SMI-S in PowerShell scripts for automation of administration.

Before configuring StarWind SMI-S Agent, you need first to configure StarWind iSCSI SAN Service. Use StarWind Management Console to connect to StarWind Service and then create an empty iSCSI target (Figure 1 and Figure 2). Let’s give it the name “empty”. 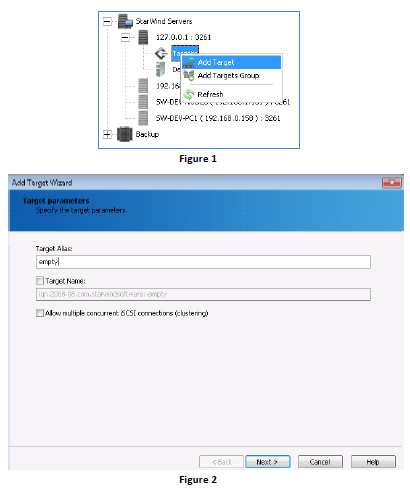 The installation process is rather common – the installer guides you through several wizard steps, then unpacks the files and registers the system service.

Note: It is not necessary to install StarWind SMI-S Agent on the same server with of StarWind iSCSI SAN.

After installation of StarWind SMI-S Agent configure it with the StarWindSMISConfigurator utility (Figure 3). 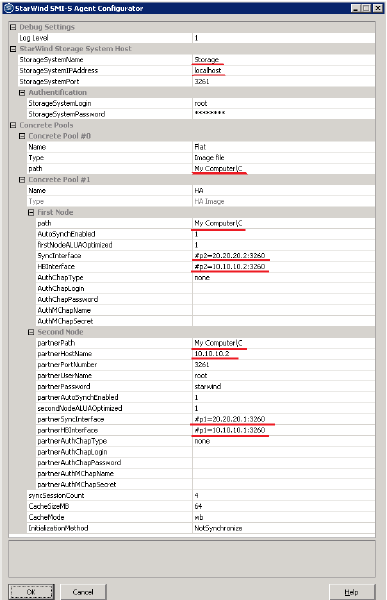 4. In the StorageSystemName text field specify the name for a disk array, e.g. Storage.

6. Leave the number in the StorageSystemPort field unchanged.

Note: Please distinguish between StarWind Service management Port 3261 and the Port 5988 which provides an access to StarWind SMI-S Agent.

7. In the path fields specify correct paths to folders where disk device images will be stored. You have to specify paths to the server where StarWind iSCSI target is launched.

Note: When you fill in the path fields, use the same format as that used for creation of virtual devices in StarWind Management Console.

Note: Configuration of an HA storage pool is described below.

8. After you applied the new settings restart the StarWind SMI-S Agent service.

Note: Before restarting StarWind SMI-S Agent, make sure the StarWind Service is up and running.

Other settings should be left as default.

1. Path and partnerPath – paths to the folders with disk image files of each HA device node.

4. SyncInterface and partnerSyncInterface – an address and port of the partner sync interface. “#p2” is used to indicate the second partner.

5. HBInterface and partnerHBInterface – an address and port of the partner heartbeat interface.

1. Click the Add Resources button (Figure 4, highlighting 1) on the toolbar of the SC VMM console. 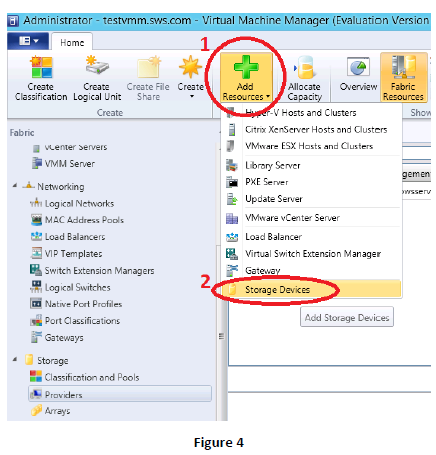 3. Specify type of a storage provider. Select Add a storage device that is managed by an SMI-S provider radio button (Figure 5).

Attention. A host with installed StarWind SMI-S Agent must be located in the same domain with MS SCVMM 2012. If your organization doesn’t use a domain, make sure that DNS has a record that links a host IP with its name.

Save the file and restart the StarWind SMI-S Agent service. Then enter to the command line the following:

The <username> field should be filled in with the name of the existing account on the host that runs StarWind SMI-S Agent. 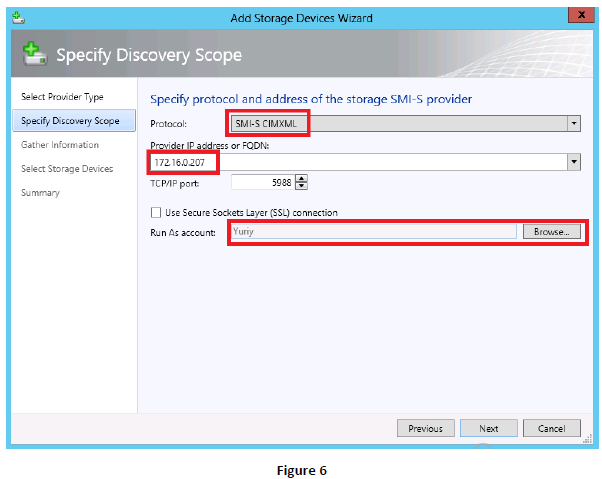 6. If the wizard succeeds to connect to provider, it will display all available disk arrays. Figure 7 illustrates that wizard has detected the StarWind’s storage device called TestStorage.

7. Click Next and select pools to be assigned to VMM (Figure 8). Every selected pool has to be classified. If there are no classification options yet, click Create classification to carry out the required action. 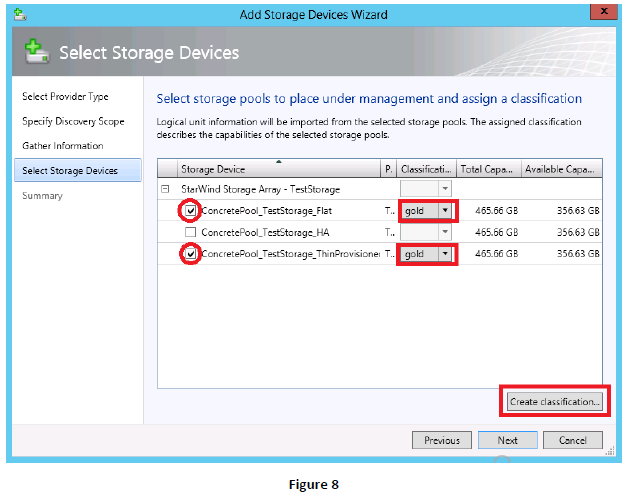 8. Confirm the settings specified before. Summary displays the information regarding disk array, provider and pools to be managed by VMM (Figure 9). 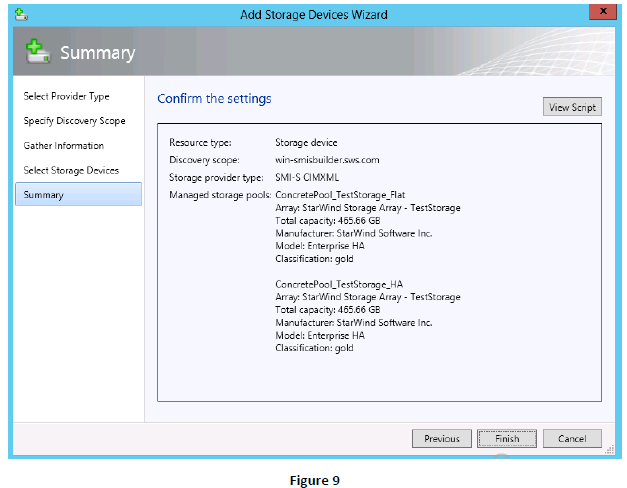 A logical unit (LU, Storage Volume) is created on the basis of a storage pool. All created devices are displayed in the Classification and Pools column (Figure 10). The screenshot below illustrates that there aren’t any logical units yet. 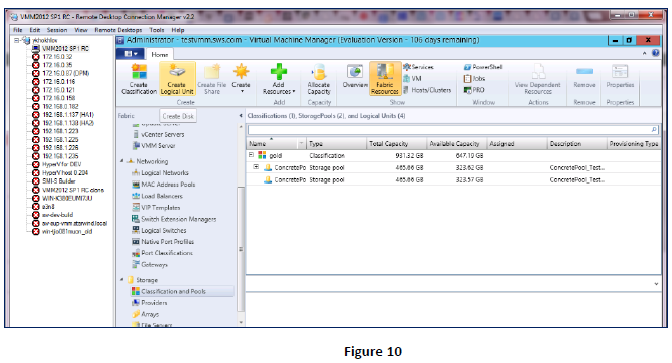 To add a new logical unit:

2. In the Create Logical Unit dialog select a storage pool, specify name and size of a LU, and click OK. 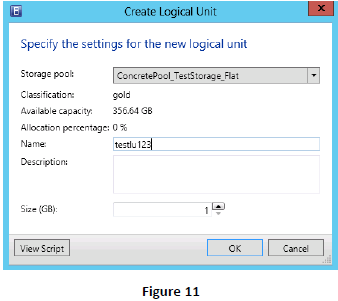 A newly created device appears on the list (view the Name column).

Note: The new logical unit testlu123 is not assigned to any host which is displayed by the value No in the Assigned field.

The device is active, but since it is not connected to any target yet, it is not available. Note the image file location is My Computer\C\Images. 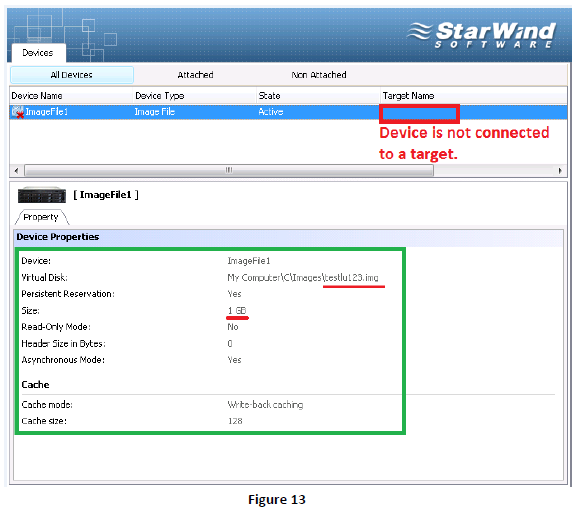 Attention. If you are going to create logical units from an HA storage pool, you have to previously create a service HA logical unit with minimum 1GB capacity. Note that this service unit must be created before assigning storage pools to hosts and before adding disk arrays on hosts. Do not assign the service HA unit to any host to avoid using it by mistake. 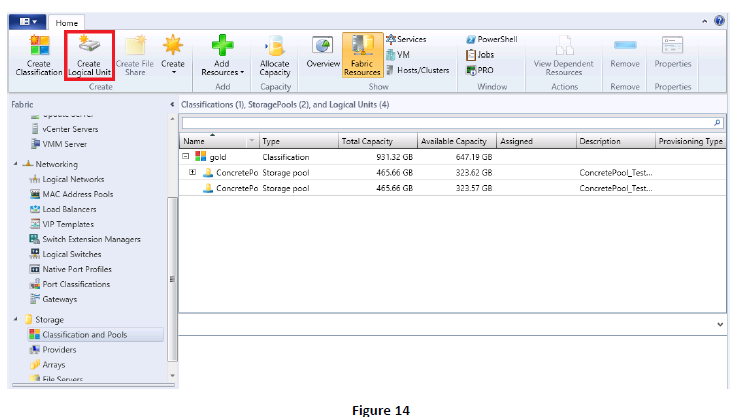 2. In the Allocate Storage Capacity dialog, click use one of the following buttons: 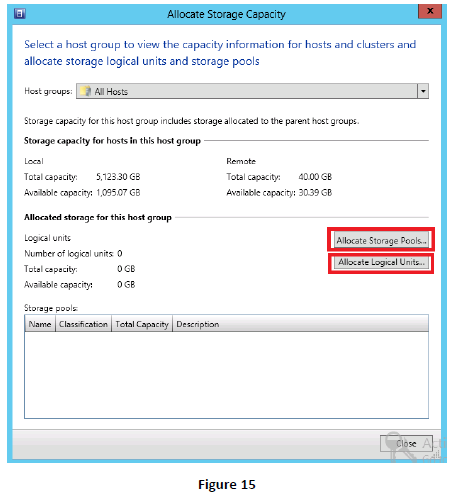 3. In the Allocate Storage Pools window, select the Display as available only storage arrays that are visible to any host in the group checkbox to verify that storage pools are available on the network.

Note: If after selection of this checkbox the storage pools disappeared from the list, you need to refresh the information on a Hyper-V host and storage provider.

If storage pools aren’t displayed on the list, check the firewall settings, network paths, network zoning, etc. It is likely that the Hyper-V hosts from the group have no access to the StarWind iSCSI SAN service.

4. Select a storage pool and click the Add button.

5. Repeat the same procedure for every storage pool. 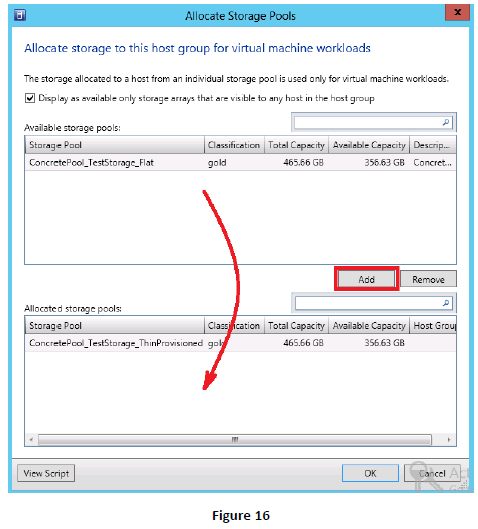 7. Follow the same procedure to allocate the logical unit to the All Hosts group (Figure 17). 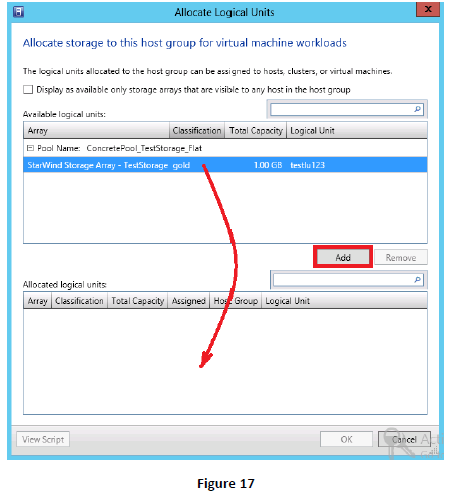 To connect a logical unit to a Hyper-V host:

1. Choose a host and click Properties on the shortcut menu. 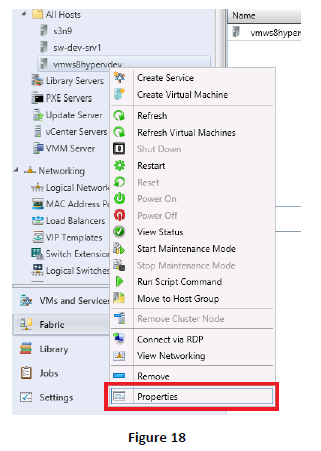 2. In the Properties window, click Storage on the left pane (Figure 19). 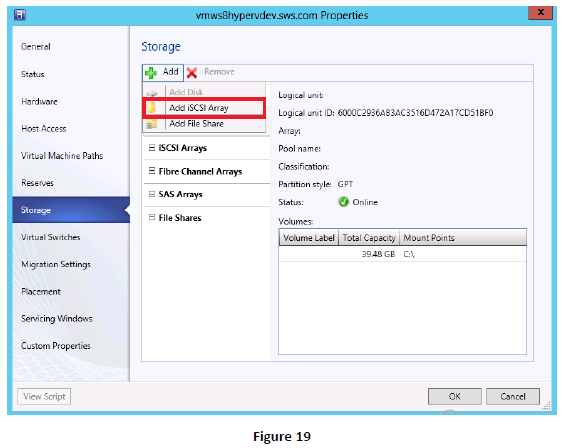 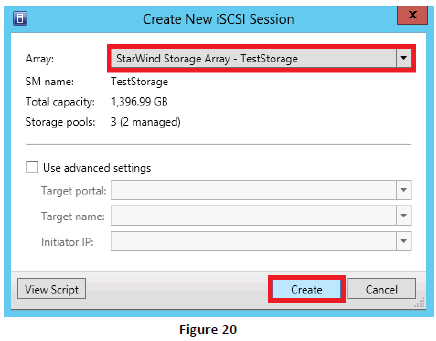 A new disk array appears on the Target portals list on the Discovery tab of an iSCSI initiator Properties of the selected Hyper-V host. 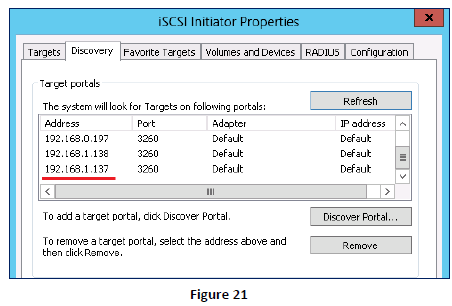 Now as a new array has been added, you can base on it new disks and connect to it the existing ones.

5. Click Add and then Add Disk to connect a new disk to the host. 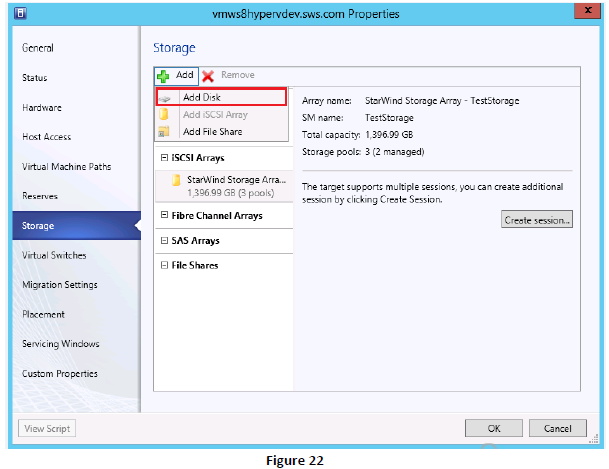 Note: Since the logical unit testlu123 has been allocated to the host group All hosts, now it is shown on the list of available devices (Figure 23, red underlined). 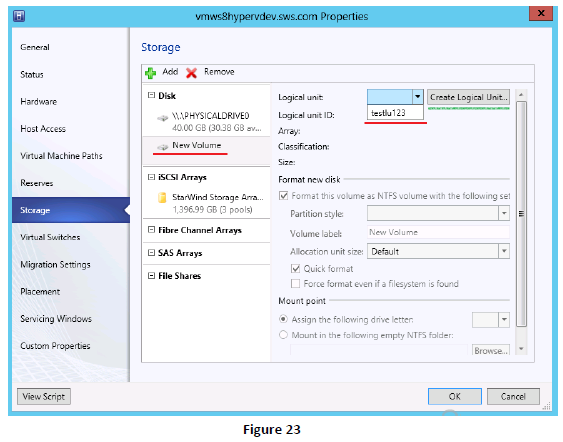 As soon as you selected the logical unit, the system provides all information available for it (Figure 24). VMM suggests disk initialization, it’s formatting to NTFS and assigning a disk letter to make a logical unit available for storing VHD-files of VMs. 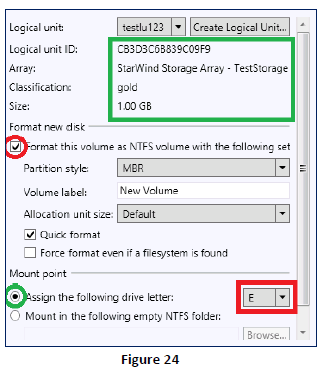 6. Click OK to connect a logical unit to a Hyper-V host.

The host has connected to the iSCSI target iqn.2008-08.com.starwindsoftware.192.168.1.137-testlu123.img, and a new 1GB volume has been formatted to NTFS (Figure 26). This proves the connection of a logical unit to a Hyper-V host succeeded. 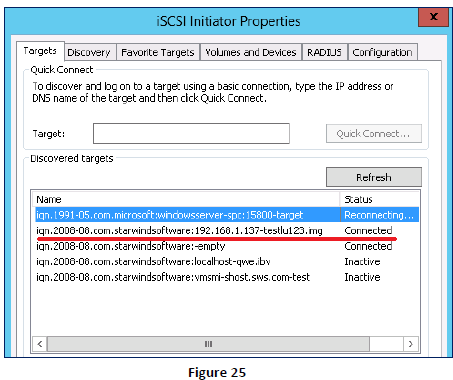 7. Expand Storage, right-click Classification and Pools of the SC VMM 2012 Console (Figure 27) and view that the details of a logical unit testlu123 have been updated. The property Assigned got the value Yes. 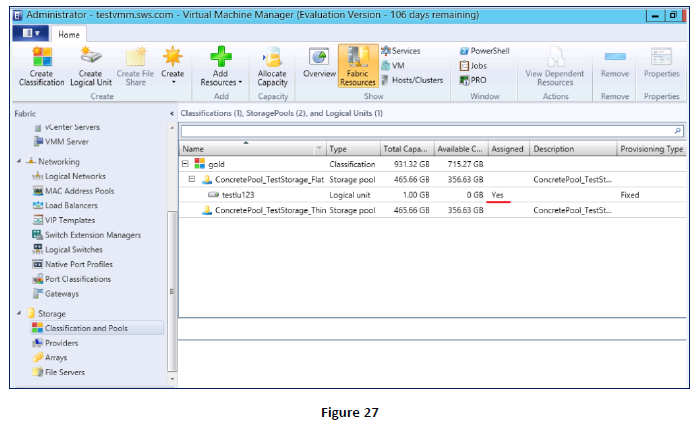 The same information is displayed on the Target List tab of StarWind Management Consol. iSCSI Sessions tab shows the initiator iqn.1991-05.com.microsoft:vmws8hypervdev.sws.com to be currently connected to the selected target (Figure 29). 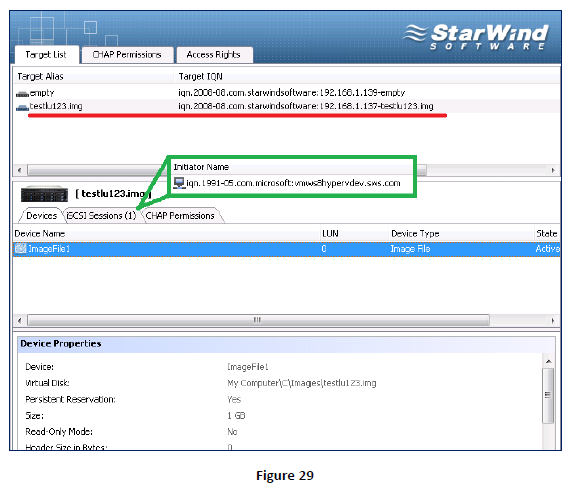 When a logical unit is allocated to a host, SMI-S provider also adds to the StarWind’s ACL service the access rule permitting connection of the selected host to a target (Figure 30).

Note: Names of ACL rules created by SMI-S provider always include the prefix SMI-S. We do not recommend to change these rules or manually delete them from StarWind Management Console. 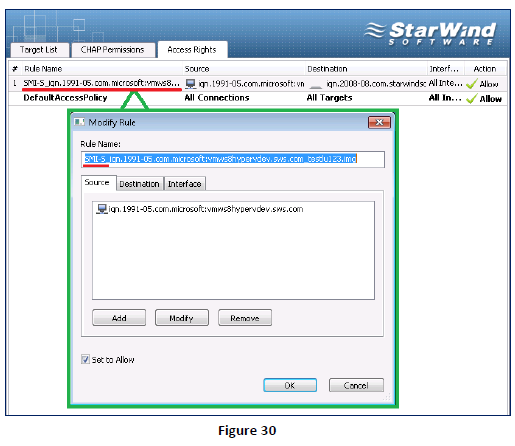 2. On the Storage pane select a disk you need to remove and click the Remove Disk button (Figure 31). 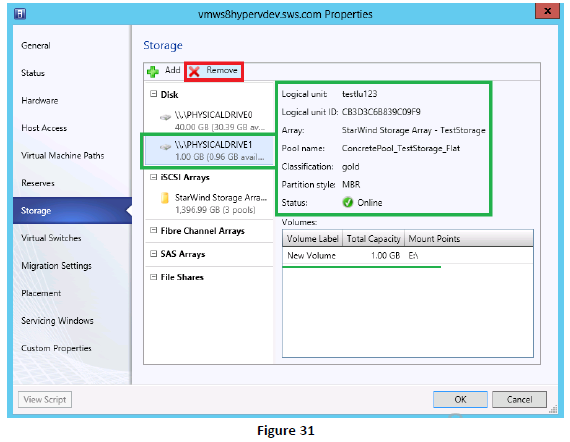 3. Clicking Yes in the VMM dialog to confirm disconnection of the selected logical unit (Figure 32). The logical unit and its data remain untouched so you will be able to connect this device later at any time.

If you don’t need a logical unit anymore, you can delete it thereby freeing the space occupied in the storage pool. A logical unit should be disconnected from all Hyper-V hosts in order to be deleted. You need to make sure that the property Assigned has the value No.

To delete a logical unit:

2. Select a logical unit that you need to delete and click Remove on the shortcut menu.

3. Click OK in the VMM dialog to confirm the deletion (Figure 34).

All current and previous operations of SC VMM are listed on the Jobs window (Figure 35). The green checkmark and the status Completed show that all operations mentioned above have been successfully completed. 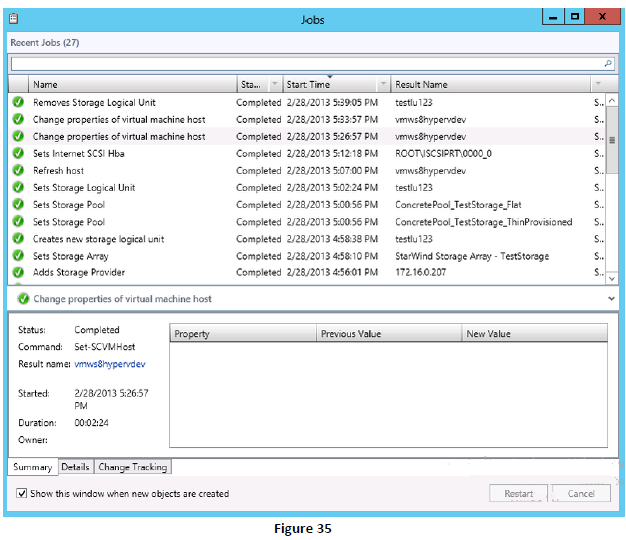 Support of the SMI-S standard by a new version of SC VMM 2012 is an important step for the automation of the cloud infrastructure management. Now most operations can be performed from the VMM Console and there is no need to address management utilities provided by the disk array manufacturers, for example, StarWind Management Console. Use of SMI-S substantially simplifies administration as it eliminates the need to operate different disk arrays produced by various vendors.

All the operations mentioned above can be also performed by means of PowerShell scripts, which provide even more automation capabilities and simplifies management.