For technically savvy IT decision makers, this paper examines how to use StarWind to implement multiple, software-defined, hyper-converged, Virtual SAN that support VI high-availability (HA) features, including Hyper-V Live Migration in a Failover Cluster. Using two, three, or four StarWind servers, IT is able to configure storage platforms with differing levels of HA support, on which HA systems can be built using native VI options. By layering Hyper-V HA systems support on a foundation of StarWind HA-storage resources, IT is able to provide a near fault tolerance (FT) for key business applications, for which IT is frequently required to support a service-level agreement (SLA) addressing business continuity.

In particular, StarWind is seeking to change old HA notions that equate high-performance shared storage with an expensive complex hardware-dependent SAN. A StarWind Virtual SAN typically requires no capital expenditures and avoids disruptive internal IT struggles between storage and network groups via a wizard-driven management console.

Building on a mature iSCSI software foundation, StarWind uses advanced virtualization techniques to represent device files as logical disks and decouples these devices from iSCSI targets. As a result, StarWind enables IT to address the needs of line of business (LoB) users by exporting logical disks with explicit support features tailored to application requirements.
In particular, IT administrators are able to invoke a wizard to create feature-rich logical devices utilizing NTFS files located on any standard storage resources, including DAS. What’s more, IT administrators able to modify and replace decoupled logical device files while leaving client iSCSI target connections live during the entire process.

Layering Storage and CPU Availability for Near Fault 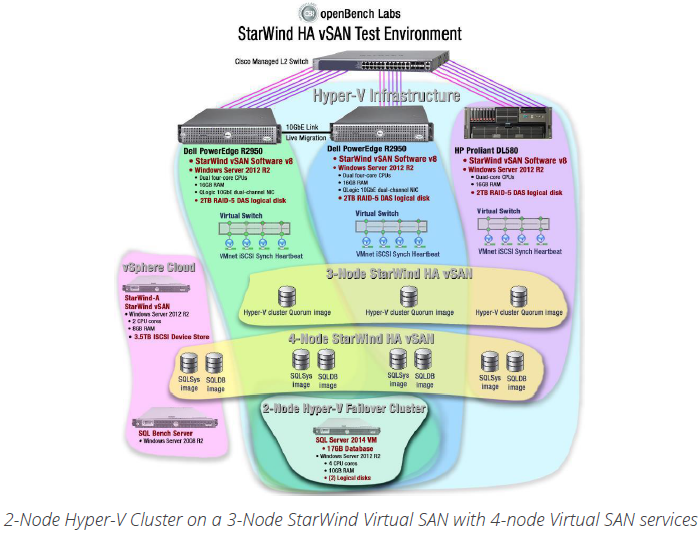 The StarWind iSCSI-based Virtual SAN service runs directly on the Windows Server OS of a Hyper-V host to virtualize devices for the hypervisor. In contrast, competitive products typically use Hyper-V VMs, which requires those services to pass all I/O through the hypervisor for virtual devices used by the hypervisor.

On the other hand, a multi-node HA StarWind Virtual SAN cluster ensures the availability of the data volumes exported to clients, which are typically Hyper-V and vSphere hosts needing specialized storage for deploying VMs. By synchronizing virtual device files that are replicated across multiple nodes having independent storage volumes, such as local DAS arrays, a HA StarWind Virtual SAN provides its iSCSI clients with a high level of data availability.

To support our Hyper-V VI environment, we used two Dell PowerEdge R2950 servers running Windows Server 2012 R2 with Hyper-V and an HP DL580 server running Windows 2012 and Hyper-V. To test our VI, we first created a 3-node HA StarWind Virtual SAN to provide a shared quorum disk for a 2-node Hyper-V Failover Cluster. By using a 3-node StarWind Virtual SAN, the quorum disk would remain available even if both of the nodes in Hyper-V cluster were to fail.

To provision the failover Hyper-V cluster with cluster shared volumes (CSV) based on HA storage, we leveraged StarWind’s ability to incorporate an active vSphere StarWind VM with physical Hyper-V servers to create a 4-node HA Virtual SAN. More importantly, in Windows Server 2012, CSV has been expanded beyond the Hyper-V workloads to include scale-out file server and SQL Server 2014. Given the many new roles of CSV in a failover cluster, scaling the number of nodes in an HA Virtual SAN minimizes the impact of synchronizing a replica device in the event of a Virtual SAN device or node failure—much like a multi-spindle RAID array minimizes the impact of a disk crash.

With a 4-node StarWind Virtual SAN, we were able to provide continuous processing for an I/O-intensive OLTP application in the event of either a storage or a host computing failure, while not incurring any performance penalty as resources were restored. What’s more, our configuration with separate logical devices supporting the VM’s OS and the VM’s data also demonstrate the ability to implement different levels of HA support for greater granularity in StarWind resource consumption.

We initiated storage provisioning for the StarWind Virtual SAN environment by configuring an array of six local SATA drives on each host as a RAID-5 volume. Using this volume, we configured a logical 50GB OS volume on each server and a logical multi TB VM storage volume to support both StarWind disk device files and local Hyper-V volumes. StarWind devices were used to provision the failover cluster with CSVs that had HA support for deploying near-FT VMs and to provision local Hyper-V hosts with volumes that featured advanced storage capabilities provided by an internal log-based file system for provisioning local VMs not requiring HA support.

By default, StarWind creates a 128MB L1 write back cache in RAM for each logical disk device and also supports an L2 cache using local flash storage devices. This memory cache can provide a significant boost for configurations using consumer-grade SATA disk drives. Given the 128MB cache on each of our enterprise SATA drives, as well as the significant amount of cache on the host’s RAID controllers, we chose not provision a StarWind L1 RAM cache, which essentially would have extended host memory and CPU resources to cache data located in our existing data cache. 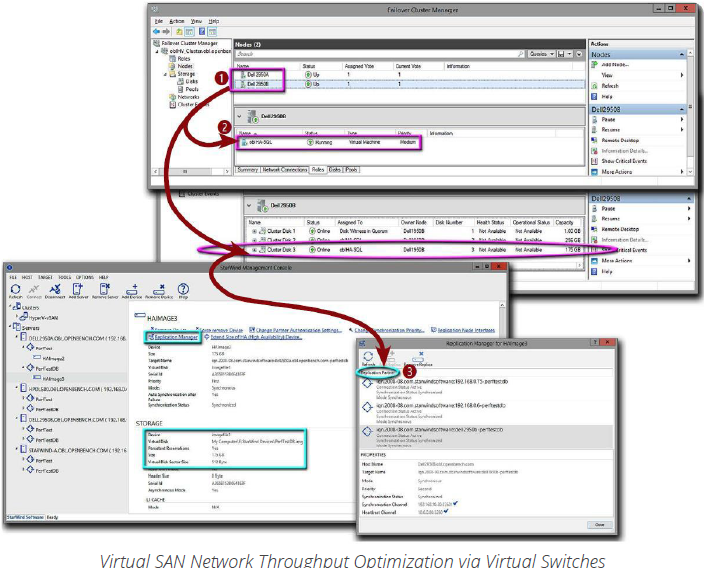 We leveraged virtual 10GbE host ports to support a dedicated 1GbE NIC for each StarWind network function: iSCSI data traffic, synchronization, and device heartbeat to simplify network management. We did not share any of the Hyper-V virtual switches used for Virtual SAN ports with any Hyper-V VMs. More importantly, we measured a significant I/O throughput boost streaming synchronization data, using a virtual 10GbE port data when restoring a failed device. 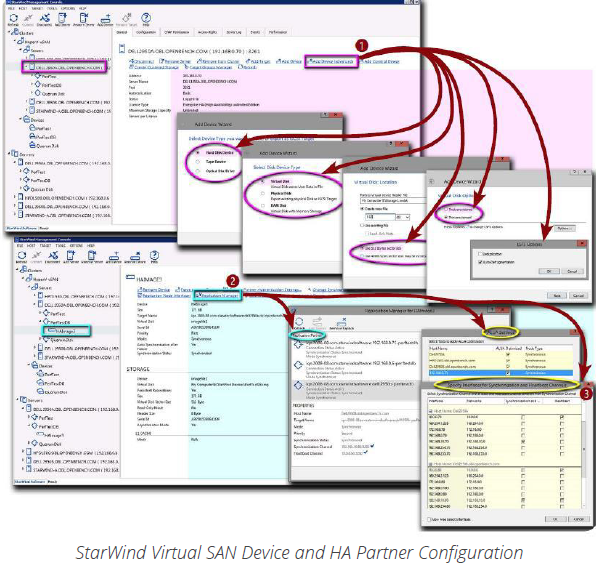 With the StarWind Virtual SAN service installed on each Hyper-V host, we utilized the Management Console to create, attach, and manage logical device files on multiple servers. Using the context-sensitive configuration wizards in the Management Console, an administrator follows a step-by-step series of options to create❶ and configure iSCSI devices and targets independently of each other. Consequently, device features, can be modified without changing active target configurations. StarWind device options include block sector size and the use of a log-based file system capable of supporting thin-provisioned and data de-duplication. For an HA SAN device, a thick-provisioned disk image is required.

Wizards to modify device properties after configuration include the Replication Manager❷. IT administrators use the Replication Manager to set HA characteristics including the replication partner nodes, asynchronous logical unit access (ALUA) path settings—all target paths are optimized by default—and assign the networks❸ that will be used to isolate synchronization and heartbeat traffic from iSCSI client traffic. Isolation of data synchronization traffic is critical in a scaled-out Virtual SAN, in which the volume of synchronization data received from Virtual SAN partner nodes will be two to three times greater than the volume of iSCSI data received from a client, as each Virtual SAN node consolidates a full copy of all iSCSI data sent by a client host server. 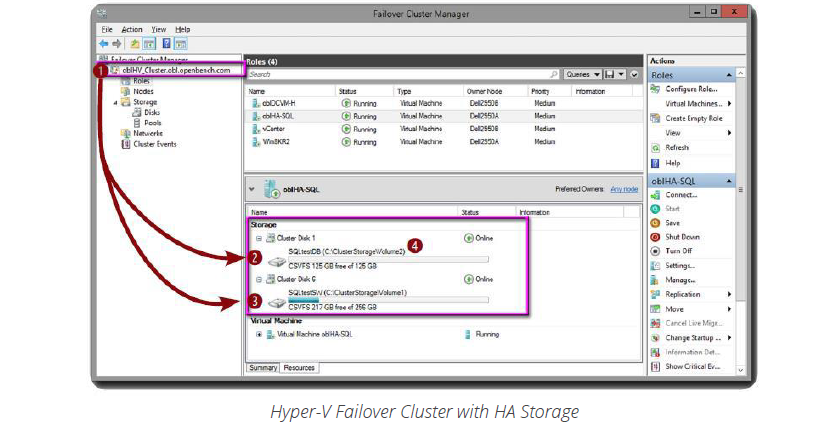 To create a near-FT platform to run our OLTP business application, we configured a failover Hyper-V cluster, dubbed oblHV_Cluster❶, on two Dell R2950 servers. To facilitate Hyper-V cluster failover, we used our 3-node StarWind Virtual SAN to provision a logical quorum disk❷ that would remain available if either or both of the cluster hosts failed.

Using the Failover Cluster Manager, we added two CSV❸ that were created on the 4-node HA Virtual SAN to oblHV_Cluster for the deployment of near-FT VMs. In particular, we used one CSV to both of the cluster shared volumes to provision the role of a failover cluster VM for oblHA-SQL❹, which would run our OLTP business application. One CSV supported the system while the other supported the application database.

Our OLTP test scenario is built on a business model for a brokerage firm. In this model, customers generate transactions to research market activity, check their account, and make stock trades. The company makes market transactions to execute customer orders and updates customer accounts.
To support this business model, the underlying SQL Server database has 33 tables that contain all of the unique active trading information of customers, along with the customer’s detailed trading history. The database also contains a set of fact and dimension tables with common data, including company names, stock exchanges on which companies trade, client identification, broker identification, and tax codes.

To test this model, all of the queries directed at the model’s database are generated on an external client running on a VM in our vSphere VI. The client program uses ten weighted transaction templates and a random number generator to create SQL queries that spread transactions for new trading activity across users and stocks. To ensure that our queries sufficiently exercise the underlying storage subsystem rather than cache, we populate the database with 24GB of table data. 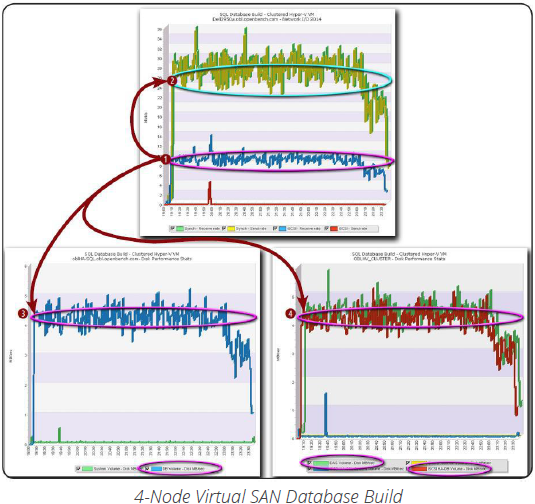 With the infrastructure provisioned for the test VM. oblHA-SQL, we ran a script to populate the database table space with 24GB of application data. While populating database tables and generating indices on oblHA-SQL, each node in the 4-node Virtual SAN exhibited a nearly identical network traffic pattern:

For CIOs, the top-of-mind issue is how to reduce the cost of IT operations. With storage volume the biggest cost driver for IT, storage management is directly in the IT spotlight. 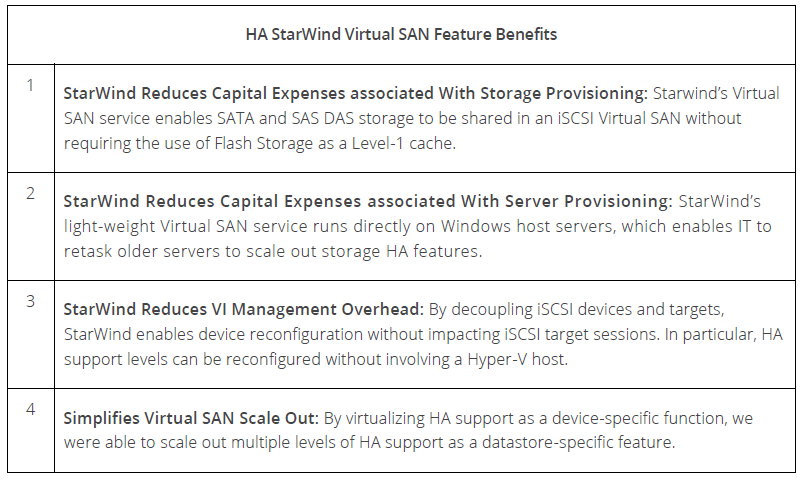 At most small-to-medium business (SMB) sites today, IT has multiple vendor storage arrays with similar functions and unique management requirements. From an IT operations perspective, multiple arrays with multiple management systems forces IT administrators to develop many sets of unrelated skills.

Worse yet, automating IT operations based on proprietary functions, may leave IT unable to move data from system to system. Tying data to the functions on one storage system simplifies management at the cost of reduced purchase options and vendor choices.

By building on multiple virtualization constructs a StarWind Virtual SAN service is able to take full control over physical storage devices. In doing so, StarWind provides storage administrators with all of the tools needed to automate key storage functions, including as thin provisioning, data de-duplication and disk replication, in addition to providing multiple levels of HA functionality to support business continuity.