Modern data storing technologies offer some alternatives to tape hardware, but, nevertheless, tape is still relevant today: the reasons are lowest cost per terabyte stored, excellent long-term data storing, archiving, vaulting capabilities and the fact, that it was designed especially for these purposes. Companies of financial, legal, healthcare, law enforcement and government sector have to adhere to regulatory requirements, which force them to use tape archives and vault vast amounts of data for extensive time periods.  enerally, utilizing tapes requires complex on-site infrastructure of specialized hardware and software in order to handle them properly. Also, the remote off-site DR setup must be maintained, so rebuilding it all to utilize other data storing media is simply unreasonable.

Utilization of tape technology requires extensive hardware resources for both on-site and off-site infrastructures, which are very expensive. Smaller businesses prefer to use cloud services for DR purposes instead of own remote locations and secondary setups. Maintaining such a site and outfitting it with hardware lengthens the bill heavily in terms of CapEx and OpEx. It’s difficult to predict the required capacity, so in order to avoid shortages, tapes will be purchased at a higher rate than the task demands. Also, servicing a tape hardware setup requires much effort from the on-site IT team, which means even higher expenses. Again, the secondary location also adds to the bill, when the IT infrastructure is complete with backup and Disaster Recovery solutions. One may virtualize tape hardware and tapes, utilizing hard disks, but the latter are less reliable in terms of long-term data storing. Besides, there is still the need for a secondary remote site or tape-oriented cloud for the data
to dwell upon.

Tape virtualization as the first step and “tape-in-cloud” as the second are the way to go for those, who want to create an IT infrastructure complete with backup and DR solutions without having to maintain a secondary site. Storing backup in the form of virtual tapes on hard disks in StarWind Virtual Tape Library gets rid of the bulky tape hardware. In order to gain a remote location for backup and DR purposes with little to no effort, it will be a good idea to utilize cloud storage, like Amazon, Azure or Iron Mountain. This way, the backup process is not only accelerated, but also rendered much safer due to cloud utilization. Eventually, the data ends up as “tape-in-cloud” either way, because most cloud providers offer such a service – Amazon Glacier, Azure Backup, etc.

StarWind Virtual Tape Library uses AcloudA, a 3.5” device that mimics a standard SATA or SAS hard disk, but holds no data within itself and is functionally a turnkey gateway to cloud. Replacing one of the HDD with AcloudA automatically employs public cloud as an extra data tier without any other requirements. It utilizes standard iSCSI and SMB3 protocols, so it will work even if the initial setup does not support cloud gateways for some reason. StarWind Virtual Tape Library has no lock-in of any kind, so it easily
accepts AcloudA. 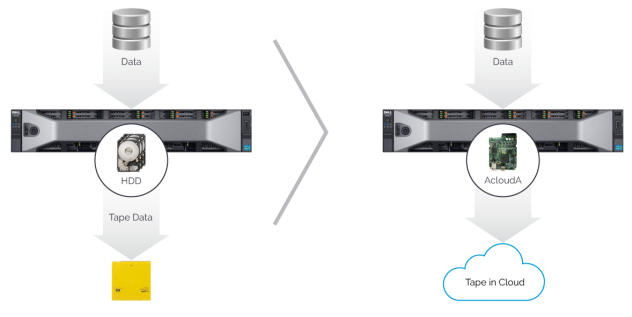 AcloudA sends all tape data through iSCSI or SMB3 to cloud, where it is still stored on tape

AcloudA-based cloud connection is physically impervious to hacker attacks. As long as all the data that goes to the cloud is encrypted and the keys are held within the primary appliance, there is no way to intercept any real data. Even if the hacker manages to get into AcloudA proprietary OS and get full control of the device, he will achieve nothing, because there is physically no way to go past it into the primary infrastructure.

StarWind Virtual Tape Library with AcloudA is a way to reduce tape data storing CapEx and OpEx. It opens a gateway to a remote and independent vault, where data is stored on tapes, without any additional hardware expenses. AcloudA attaches to StarWind VTL replacing a hard disk, and functions as an unbreakable cloud gateway, meaning it won’t let any external force in under any circumstances. Basically, StarWind VTL and AcloudA allow the user to store data as “tape-in-cloud” and reap all the benefits of tape hardware without having to deal with its drawbacks.