StarWind VSAN comes with a wide set of features and can be used for two main deployment scenarios:

The full set of up-to-date technical documentation can always be found here, or by pressing the Help button in StarWind Management Console.

For any technical inquiries, please visit our online community, Frequently Asked Questions page, or use the support form to contact our technical support department.

In hyperconverged environments, StarWind VSAN becomes a part of a hypervisor host. This deployment scenario enables to achieve both outstanding performance and unified administration with hypervisor-specific management tools. StarWind VSAN gets the job done with all major virtualization platforms: it can be installed as an application on Windows Hyper-V or nested inside a VM on VMware ESXi. Non-virtualized clusters typically deployed for performance-intensive SQL Server and Exchange installations are also fully supported.

In hyperconverged setup, StarWind VSAN leverages all benefits of the local storage such as high performance and low latency. This is achieved by bonding all I/O to the local hypervisor node. Such a design provides multiple benefits over a dedicated hardware solution:

There are few options for deploying StarWind Virtual SAN in the HyperConverged scenario:

Installation on a Guest VM 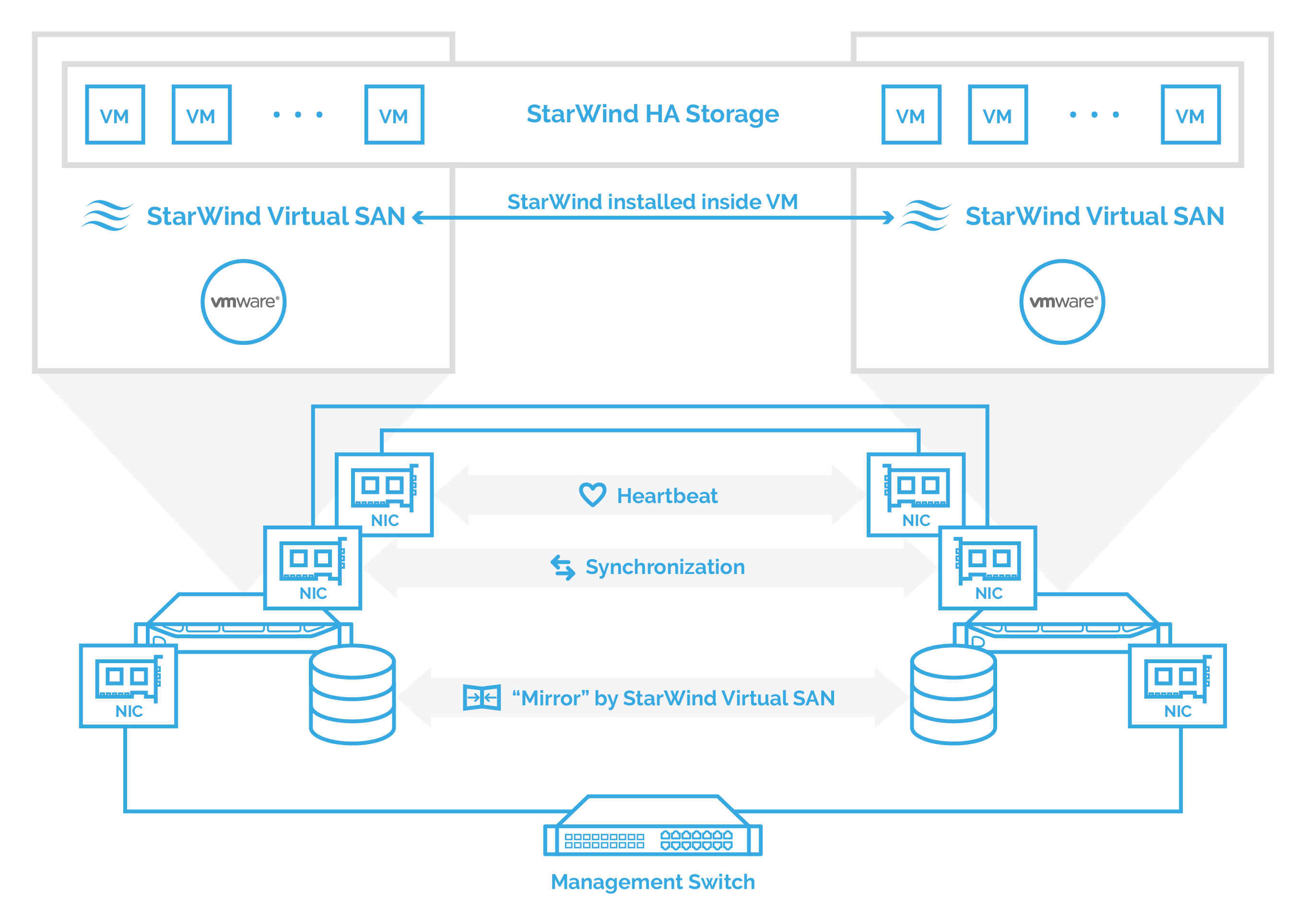 Guides on configuring a two-node setup with the VMware ESXi are available at the following links:

Installation Directly on a Hypervisor Host

This option implies that StarWind Virtual SAN is installed on the hypervisor’s physical partition so the storage can be accessed without any additional virtualization abstraction layer. As a result, this deployment type is considered to provide the highest performance among all hyperconverged options, while maintaining the benefits. 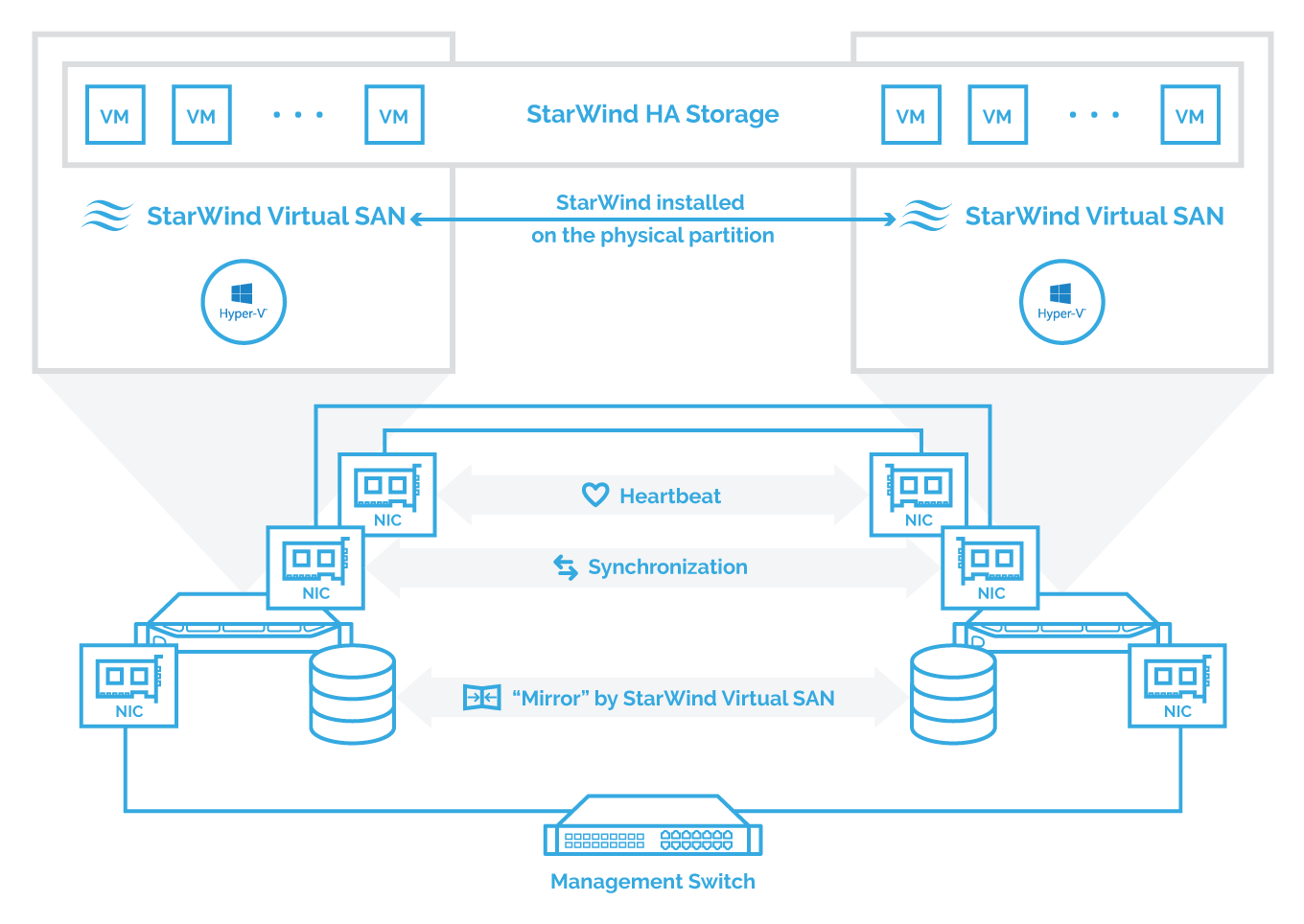 The guide on configuring a two-node setup is available at the following link: https://www.starwindsoftware.com/resource-library/starwind-virtual-san-hyperconverged-2-node-scenario-with-hyper-v-cluster-on-windows-server-2016

StarWind Virtual SAN can also run on dedicated servers, creating a separated storage layer for client hypervisor hosts. Even though the hyperconverged scenario is an industry trend now, differentiation of compute and storage layers is still a viable option when it is necessary to scale storage capacity or compute resources independently. A typical use case of this architecture is shared storage for clustered SQL Server or Oracle deployments.
While running StarWind VSAN in a compute and storage separated (or dedicated) architecture, it is possible to scale compute and storage resources independently. Such systems fit the task better while CapEx and OpEx get lower since there is no hardware underutilization. Thus, the system can be created specifically for a particular task.

Installation on a Dedicated Host

This option implies the installation of StarWind Virtual SAN as a Windows-based application or Linux VM. The storage server is a separate physical box and acts as a storage provider for the compute nodes. As mentioned above, dedicated infrastructure provides sensitive control over hardware utilization. Unlike some cases of hyperconverged architecture, this deployment type is often considered for large environments. This is caused by possible virtual resources underprovisioning that results in a significant waste of budget on the hardware that could remain unused. 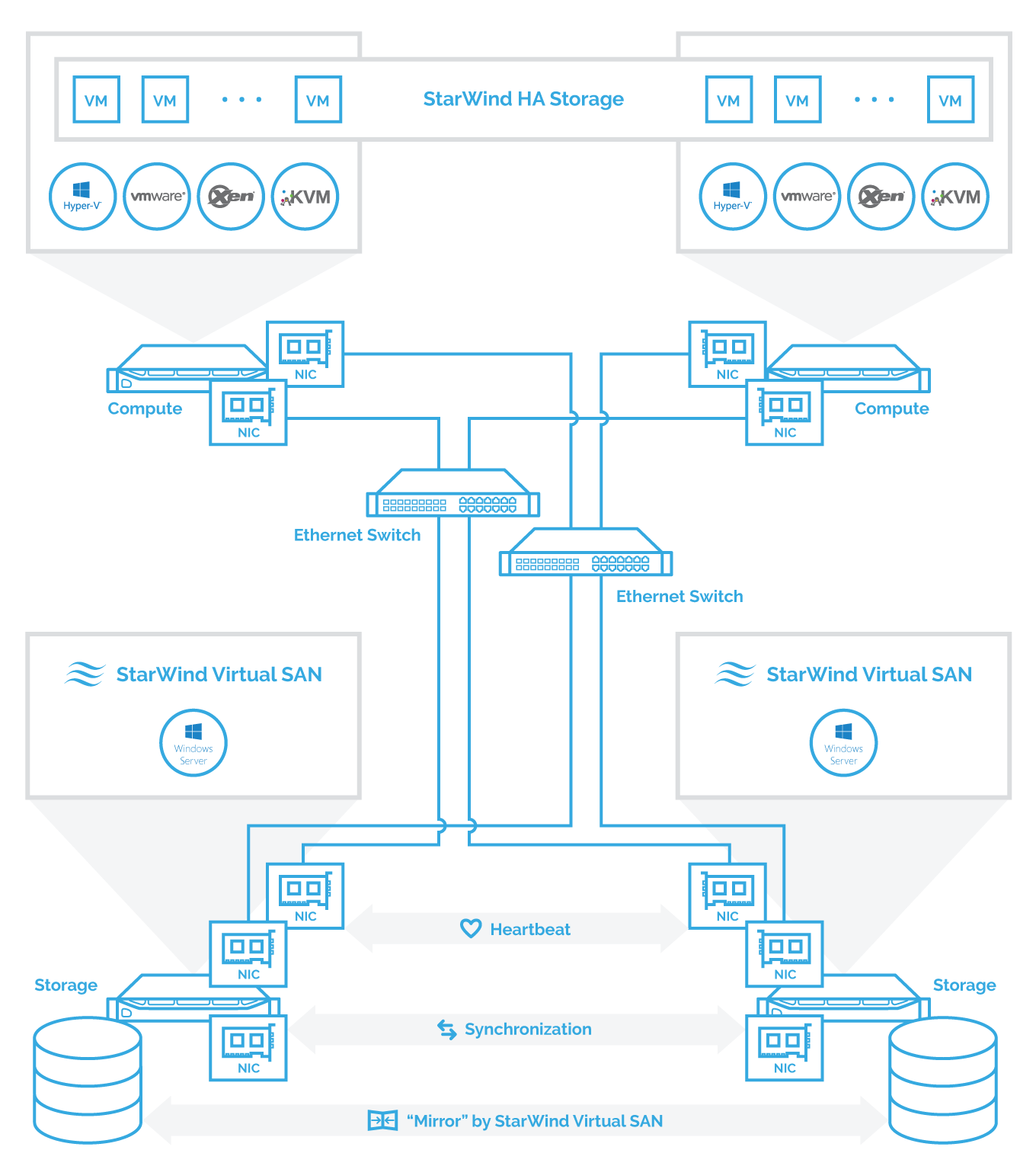 Guides on configuring a two-node setup are available at the following links:

Save your time finding all the answers to your questions in one place!
Have a question? Doubt something? Or just want to know an independent opinion?
StarWind Forum exists for you to “trust and verify” any issue already discussed and solved
Visit StarWind Forum
Power Your Business With StarWind!
Book Free Online Demo: