Virtualization is a way to improve IT operations and cut down associated costs, i.e. “get more for less”. It has been an enterprise-only toy for a long time. In the last years, the game has been changed in favor of SMB and ROBO. Now, smaller businesses can also get the most of server and desktop virtualization using VMs for various needs: file servers, SQL, VDI, etc. In this respect, remote offices resemble individual SMB, having similar hardware setups and conditions. Still, the question of balance between cost and quality, do-it-yourself and professional assistance remains.

Complexity and high implementation/maintenance costs slow down the adoption of virtualization in smaller SMB and ROBO. Enterprises enjoy a pleasant journey to construct the jigsaw puzzle of a “whole virtualization product” using state-of-art hardware and software components. They have trained personnel to design, assemble, test, fine-tune and maintain a virtualization solution. Smaller SMB can face difficulties when following the same plan with their lean IT team or no full-time IT employees at all, while the sheer number of sites makes it impossible or very difficult for ROBO as well.

There are different ideas on how to solve or work around the issue: services to build and maintain SMB or ROBO virtualization project, pre-configured virtualization solutions and off-site VM hosting. However, most of them are not effective, because: 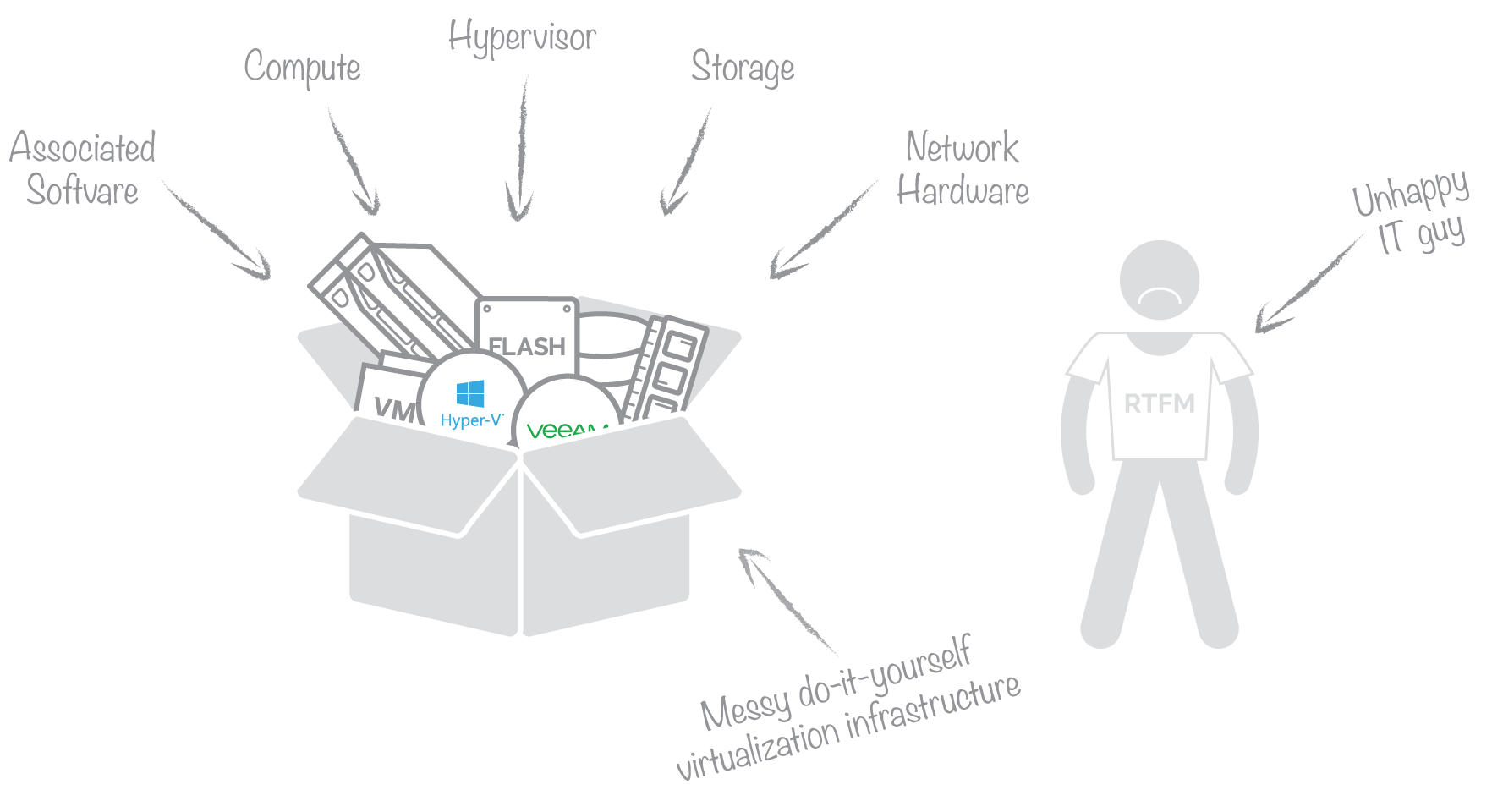 For ROBO, mid-sized and especially small SMB who are looking to bring in quick deployment and operational simplicity to virtualization workloads and reduce related expenses, our solution is HyperConverged Appliance (HСA). StarWind unifies commodity servers and storage hardware, hypervisor (Hyper-V and vSphere) and associated software into a single scalable layer. StarWind HCA has minimalistic initial hardware footprint of just two servers. Network switches are optional. Scaling unit is just one server at a time. Compute and storage resources can be leveraged individually matching customer workload and other requirements. HСA is pre-configured, pre-tested and pre-tuned for every specific case.

StarWind HСA costs at least 40% less than all the components separately, thanks to cooperation between StarWind and hardware partners.

StarWind HyperConverged Appliance is a turnkey hyper-converged hardware platform fitted into a small two-node footprint. You don’t need anything else to build a budget-friendly new IT infrastructure or upgrade an existing one. All your systems will be “babysitted” by StarWind 24/7/365, troubleshooting any concerns without your involvement. Everything’s operated through a neat web UI. We’ll also migrate your workloads at no extra cost.
Dramatically decrease your CapEx, OpEx, and IT management costs, while visibly increasing return on investment (ROI) with hyperconvergence for ROBO, SMB & Edge from StarWind. Hyperconverged Appliance from StarWind HCA Datasheet

StarWind HyperConverged Appliance is a virtualization solution crafted right for SMB and ROBO: not adopted or “corner cut” for them, but designed from scratch and purpose-built to meet their unique needs. It comes either as an all-inclusive turnkey product complete with hardware or a software solution to deploy the HСA on existing industry-standard hardware.