The first generation of converged solutions simply packaged components together into a single rack-based deployment that could be ordered under a single SKU (Stock Keeping Unit). Many solutions were static in nature and provided companies nothing more than a single point of contact and some savings in solutions testing.

Hyper-converged solutions merge server and storage into the same form factor, eliminating the need to deploy and manage separate physical components. Bringing these constituent parts together allows simplification of the hardware and the ability to move many features to software, including data protection, data reduction, resiliency and the ability to scale out.

Vendor offerings are not restricted to packaged hardware and many solutions are available in software-only format. These kinds of products can be beneficial to the customer in many ways, fitting in with existing hardware infrastructure standards and practices. Ultimately the features of the software define any hyper-converged solution.

Some of the most common vendor products are discussed in this paper.
The conclusion of this white paper is a feature comparison between Virtual SAN from VMware and Virtual SAN from StarWind Software.

StarWind Virtual SAN is the evolution of the StarWind iSCSI Target, which has been in development since 2003. The Virtual SAN software integrates into Windows Server environments (2008 R2 and later) adding data services (availability, performance, efficiency) to complement those offered on the Windows platform.

Putting a Definition to Hyper-Converge

Hyper-converged solutions follow on from the first wave of consolidated hardware and software offerings known as Converged Infrastructure. Converged Infrastructure solutions have been around since late 2009 and package servers (compute) with storage and networking to deliver an “all-in-one” offering, usually managed by custom software that provides a layer of orchestration to provision and manage virtual machines.

Many converged solutions are static in nature, with little flexibility to expand the configurations and so do little more than provide customers with a “single throat to choke”, alleviating some of the overhead of certifying multiple components into a single solution.

Some converged infrastructure offerings aren’t delivered as a product and are classed as “reference architectures”, requiring the customer to purchase the individual components separately. However all Converged Infrastructure solutions place all of the hardware components into a standard rack configuration that still ultimately requires storage management, networking and server skills. 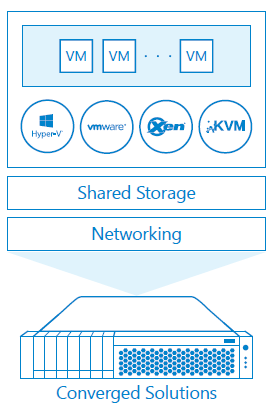 Hyper-converged solutions take things a step further than simple product packaging by eliminating the separate storage and server components, merging them together into a single form-factor. The “secret sauce” is delivered in the software, which provides the functionality of converged solutions (and more) without the additional hardware and management overhead.

Hardware-based solutions take standard off the shelf servers, integrating networking and storage into the chassis to create an appliance. The appliances will typically be configured with a number of different storage options; hard drives for capacity and flash in multiple forms to deliver I/O at low latency. The hardware will be supplemented with software that provides the functionality of a file system with features for data protection & reduction, automated provisioning, monitoring the configuration and managing the expansion of the system.

These solutions deploy directly onto customer hardware, providing the same level of software features as hardware-only solutions. As no hardware is shipped, the customer is responsible for choosing technology that works with the hyper- converged solution and that means ensuring components are both reliable and able to perform at the level of workload required. Software solutions may also have different charging models, as there are no hardware maintenance or upgrades to consider. As before, software-based solutions are all about the “secret sauce” in the software itself, which implements the advanced data management and availability features.

The Good and Bad Sides of Hyper-Convergence

The idea behind hyper-converged solutions is one of simplification. Large enterprises are able to support significant product engineering teams to validate and build configurations to their requirements.
However many small and medium enterprises lack the funding and skills to put in the same level of due diligence and design and of course many simply don’t have the economies of scale compared to large enterprises. These smaller companies have relied on vendors to provide that level of support and guidance on their behalf. Hyper-converged solutions offer benefits in terms of simplicity and reduced cost as a result of:

With hyper-converged solutions, there is a debate on whether the software components should be deployed within the kernel of the hypervisor or within a virtual machine. Kernel-based solutions such as VMware Virtual SAN are more closely integrated with the operating system and vendors will sell the virtues of closer software integration. However these solutions are also tied to the hypervisor for both feature and fix upgrades, potentially making maintenance of a hyper-converged solution more difficult.

By comparison, VM-based or driver-based hyper-converged solutions have the benefit of being more easily upgradable as they have little if no dependency on the hypervisor platform, other than to support specific features and configurations. The downside for these configurations is that the storage component is run in parallel with virtual machines serving production workloads and so there is a risk of resource contention, which the user needs to manage.

Features to Look Out for

What features are important and should be available in hyper-converged solutions? Although vendor solutions vary considerably, there is a set of basic features that should be deliverable in all solutions.

Which vendors are offering hyper-converged solution in the market place today?

Virtual SAN, more commonly known as Virtual SAN from VMware has been in general availability since the release of VMware vCenter Server 5.5 Update 1 on 11 March 2014. Virtual SAN was added as a feature to the vSphere ESXi hypervisor but requires vCenter for operations and licencing.

A Virtual SAN cluster comprises of a minimum of three vSphere ESXi 5.5 hosts in order to satisfy the minimum requirements of data redundancy. This is broken down into two servers which store mirrors (or replicas) of virtual machines in a cluster-wide distributed datastore, plus a third server to act as a Witness, in the event that networking problems make it impossible to communicate between the data hosts – otherwise known as the classic “split brain” scenario. Operationally, Virtual SAN can potentially create more Witnesses depending on the number of hosts in a cluster and the layout of data across the cluster members. 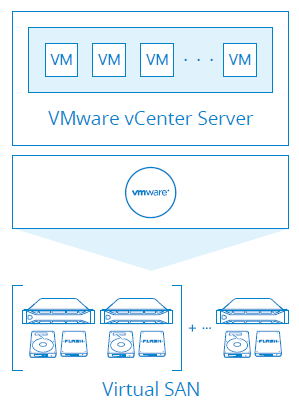 Virtual SAN uses local resources from each host, building pools of disks and flash storage into a single distributed datastore. Each contributing host must have a minimum of one hard disk and one solid state disk drive, although not all hosts in a cluster need to contribute to the storage resources but may still
consume them.

Virtual SAN storage policies are applied to virtual machines through the use of rules; a policy is constructed using one or more rules and vSphere then applies those rules when storing the virtual machine in the distributed Virtual SAN datastore. Currently five rules (or capabilities) exist:

Virtual SAN is very much a version 1.0 product; there is no support for data compression or de-duplication and the only policy for data protection is multiple mirroring. Virtual SAN Capabilities are infrastructure rather than service-based, focusing on physical aspects of the configuration rather than
logical metrics like Quality of Service.
Virtual SAN standard licensing is based on the number of CPU sockets in a cluster. Each socket is priced at $2,495 at the time of writing.

Virtual SAN from StarWind Software is an evolution of the iSCSI target product originally developed by Rocket Division Software. StarWind was spun off as a separate company in February 2009 and has continued to focus on developing the iSCSI target software into today’s Virtual SAN.

Virtual SAN is natively supported on Windows 2008 R2 and later, including the current flagship releases of Microsoft’s Windows Server platform, 2012 R2. Deploying Virtual SAN on Windows allows the software to use native features of the Windows operating system, such as Storage Spaces for data protection. Virtual SAN may also be used in Hyper-V environments, creating hyper-converged solutions. Virtual SAN is also supported as a VM guest on VMware vSphere.

Virtual SAN contains many data reduction and resiliency features, including inline data de-duplication and compression. Data within a Virtual SAN LUN can be stored using a Log Structured file layout, which helps to reduce the “I/O blender ” effect of random I/O produced by virtual environments.

Local data protection is achieved through synchronous mirroring, allowing a minimum configuration of only two servers to be deployed for high availability. Remote data protection is achieved through asynchronous replication, which can target either another geographic location or replicate into public cloud infrastructure such as Microsoft’s Azure or Amazon AWS. 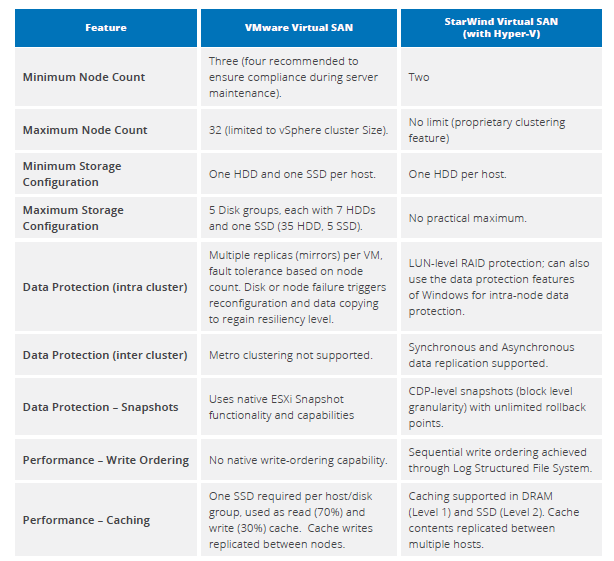 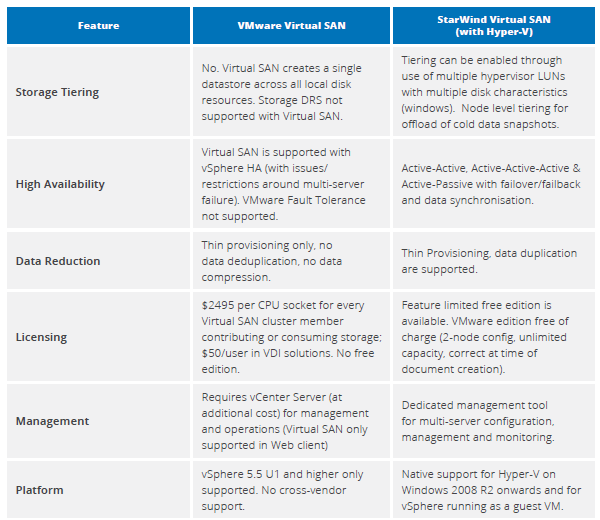